People sometimes ask me how I learned to do web design? Often I don’t want to start what I fear would be a case of TMI– Too much information.   If you truly want to know, I’ll tell you. My interest in web design began as an interest in computers. I took a computer programming class in Fortran and Pascal class in High School around 1980.  Students created punch cards that represented a maximum of 80 characters or a single line of computer code and when we had a set of these cards that represented an entire program, line by line, card for card — and they had to be stacked in the proper order of execution. We presented them to the student aide who was chief geek at the wheel in charge of submitting these cards to a machine that would read them and send them to a main location where the main frame computer was kept.  The cards’ information was processed and we got results back sometimes as soon as the same afternoon — providing we submitted them in early enough in the day.

I remember it being fun to program, and I loved getting successful results.  But, the overhead of submitting cards to someone who then needed to run a batch jobs and getting your results from a large computer in some remote location hours and hours later, didn’t really connect with me as being very exciting. 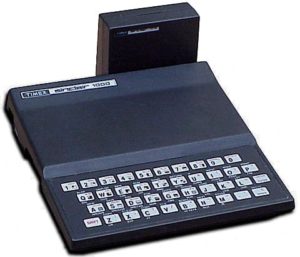 However, in 1982, I saw, in a small store window, what would become my first truly personal computer.  It was called the Timex / Sinclair TS1000.  It had 2k of ram and the monitor was your own TV set. It displayed in black and white. For $99 dollars you could take home an interactive digital experience, and I was in love.  To be usable you needed storage. The hard drive was your own cassette tape player. And the built-in 2k of ram memory didn’t allow the computer to load much more than the operating system.  A 16K memory module was really a required add on. It by itself was another $99.  I typed in a machine code program that came with the device’s manual.  It was a breakout game.  It worked.

A ball bounced off a paddle and into an array of bricks.  Hitting a brick made the ball return and the brick disappear. I spent days and days doing nothing else but programming and playing on this computer.

Then it was 1983 and IBM PC computers were being sold to home users for the first time.  My mom was waylaid by my two sisters and me to get the family a computer.  Expensive vied with young children until finally a computer resulted.

The Compaq Portable was the computer that we were awarded.  It was touted as a traveling machine — like they say about today’s laptops.  At 28 pounds, people called it the Compaq luggable.  The computer had a built-in green monochrome screen and no hard drive.  The computer was started by using one of two 5 1/4″ 320K floppy disk drives that contained Microsoft DOS, the text-based predecessor to Microsoft Windows.

In 1982, when I played with my first computer, no one knew that there would be an internet someday that would change the whole idea about what computers would be used for.  Today you don’t even think about being on a computer that doesn’t have internet access.

In 1996 I was working in a position as a Financial Software programmer, writing programs, yes — in a version of the Quick Basic — when I discovered the internet.  In truth, the internet had existed long before anyone really took notice.  It was used on college campuses as far back as 1969.

I wrote html for a free personal website  that was hosted on tripod.com.  I had an old visitor counter that would increment when I or anyone else loaded the page.  The browser of choice was Mozilla’s Mosaic and you often would use an option to turn off image viewing on websites to speed up the slow page loading.

Since then, of course, the internet is so important to all of us, that you can’t imagine your life without it.  I have been programming and developing websites that far back.  I’ve used so many different computer languages it would be difficult to list all of them. 1996 was my first interest in web design.  I’ve been fairly involved in some aspect of web design ever since.

Whats the purpose of WWW before a website address?